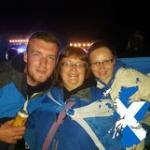 Clubs a joke ashamed to even call myself a fan

If this isn't a reason for an April break, I don't know what is. Does anyone care what Celtic and their fans think, have they not had their fair share of finger pointing already this season? Don'

The Scottish football authorities deserve all the criticism they receive .. they have no thought or consideration for fans who attend their games. To postpone a game in April two less than two