I like to think that the lack of outrage I've received over my choice of keeper and back four suggests that I've got it right...but it probably means that nobody gives a s***.  Oh well...

Here, to try and wind folk up further, is the midfield and attack.

Even at left-back against Rangers McGregor looked pretty decent. If anything, he - and Celtic - were at their best this season when Scott Brown was unavailable and he had to drop into a deeper role. He deserves his place on the Player Of The Year shortlist. Where did Turnbull explode from? He'd only started two games for Motherwell before this season , but the 19 year old has 12 goals and counting from centre mid in 2018/19. Excellent at free kicks, nerveless and penalties and a terrific engine too; this boy is going to go far.

If this was Shinnie's last season in Scotland for the time being, he earned his move to the English Championship and Aberdeen will have a heck of a job replacing his tenacity. Haring seemed limited by injuries as the season went on but has a remarkable instinct for winning second balls. Mallan had his share of quiet days but at his best his passing was deadly and his goals spectacular. Power meanwhile has become even more influential at Kilmarnock since Youssouf Mulumbu left and has been consistently excellent.

It seems weird to say that a 27 year old had a 'breakout year' but that's what it felt like with Forrest ; no more running into cul-de-sacs, instead every decision was made correctly and at such high speed that defenders all over the country were left shaking in their boots. But for an autumn injury crisis at Celtic, Christie might never have got the chance to show what he could do; now he's cemented as a first choice for the champions. Kent went against the general trend at Rangers by getting better as the season went on; he has all the moves - and a decent punch on him - and surely there's no way Rangers can afford to make his loan deal permanent.

Mackay-Steven was having his best season since his Dundee United days until the injuries stacked up. Stewart deserves mention for his spell at Kilmarnock (but definitely not for his time at Aberdeen!). What on earth happened to him over the winter break? Hearts were so much better with Naismith on the park as much for his leadership as his ability. Despite missing half the season he still scored twice as many league goals as any other Jambo. Horgan has really pushed on since Paul Heckingbottom arrived at Easter Road and I expect a big season from him next year. Arfield often seemed the only Rangers player able to find space between the lines, and had even more influence when moved to the right flank. Kennedy was a real find for St. Johnstone and did well even though too often opponents identified him as the Saints' only threat and snuffed him out accordingly.

I know, I know, too many red cards. But Morelos scored 30 goals for Rangers this season and there's no-one in the country better at terrifying two centre-backs on his own. The idea that the Gers could do without him is ridiculous - they shouldn't sell him unless they get a really good offer.

It seems ironic that Aberdeen have taken a step backwards despite finally coming up with a regular goalscorer. If Cosgrove can become more composed in front of goal he could be even more dangerous next season. Edouard may well be the most talented centre forward in Scotland but never seems to stay fit enough to start more than a few games at a time. He still ended up Celtic's top scorer though.


So here's the XI for you in all their glory... 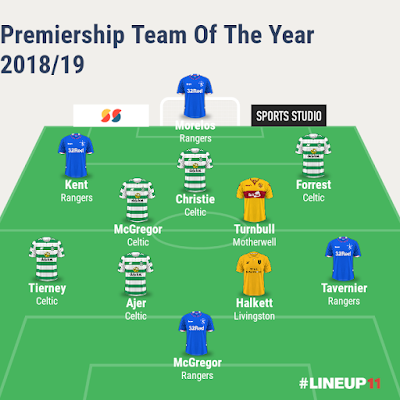 I look forward to the usual constructive criticism...


Lawrie Spence has ranted and spouted his ill-informed opinions on Narey's Toepoker since September 2007.  He has a life outside this blog.  Honestly.

Edit - here's some of that constructive feedback...

McGregor switch for Kelly. Don’t think Kent has been great but no body in the LW position has been particularly outstanding this season.
— Callum Crawford (@_crawfordcallum) May 3, 2019

The old firm seeing as you have put Nine of their players in. And two players who have finished in bottom six. Hearts killie aberdeen and hibs obviously not have any players up to those standards I presume.
— Calum (@McgheeCalum) May 3, 2019

I'm being accused of bias towards BOTH Celtic and Rangers.

Could take Kent out aswell. Guys been ***** aw season until he punches Scott brown then all of a sudden a world beater. The Hibs boy should be in, Horgan? Could have Mallan aswell. Naw am no disputing it atall a tweeted that for a laugh? :-S. Horrendous choices man.
— Jason ???????? (@Jasonnclark) May 3, 2019

Think Max Lowe for Aberdeen has been consistently good. Naismith and Power could be in with a shout in over Christie but other two clear cut as you say.
— Lewis McKenzie (@Lewis_McKenzie_) May 3, 2019