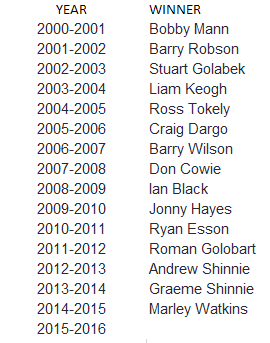 Its that time of year again .... time to go through all the polls and calculate who is winning the race to be the 16th recipient of the CaleyThistleOnline Player of the Year award. The CTO - POY award was started in season 2000-2001, and other than the Supporters Club / Trust Player of the Year award, it is the only external award recognised officially by the club and included in their year on year stats, a fact we are very proud of.

An interesting fact about our award is that in the 15 years of its existence it has never been won by the same person twice, although, to be fair, it has often been won by a player who has made such an impact with ICT that he has moved onward and upward at the end of that season or the next. Ryan Esson, who won the trophy in 2010-11 is the only player still on the books who has won it before.

Last year Marley Watkins was like a runaway train in this poll. He amassed the highest quantity of votes and points for 4 out of the first five months of the season as well as the last two months of the season and won it with 79 points. His closest rivals were Graeme Shinnie - looking to be the first ever player to win it for a second time - and Greg Tansey who both amassed what would normally be a respectable total of 44 points each. Ryan Christie and Josh Meekings rounded out the top five with 36 and 29 points respectively.

So onto season 2015-16 and with several of the top points scorers from last season gone, it was a question of who would step up and take the challenge this year .... The season started early with our Europa League debut and Gary Warren was the front runner that month winning the Player of the Month and grabbing maximum POY points in both games against Astra Giurgiu.  In August, with a heavy six game schedule, Danny Williams grabbed the monthly honours on number of votes received, closely followed by Ryan Christie and Owain Fon Williams. Christie however jumped into the points lead in the standings courtesy of more of his votes being first place votes. September and October belonged to Miles Storey and it was beginning to look like he "might do a Marley" but up stepped CTO sponsored player Liam Polworth to grab the honours for November and December. Miles was back at it again in January winning the Player of the Month again, but Ross Draper, Owain Fon Williams and Carl Tremarco have all taken it in the last three months. With one month, and three games to go, so a maximum of 15 points up for grabs, there are still 5 players who can win it. Miles Storey currently leads with 51 but he is only 5 points ahead of Ross Draper. Gary Warren, Owain Fon Williams and Liam Polworth are a little further behind, but not out of it by any means. Click on the graphics below to view the current standings. 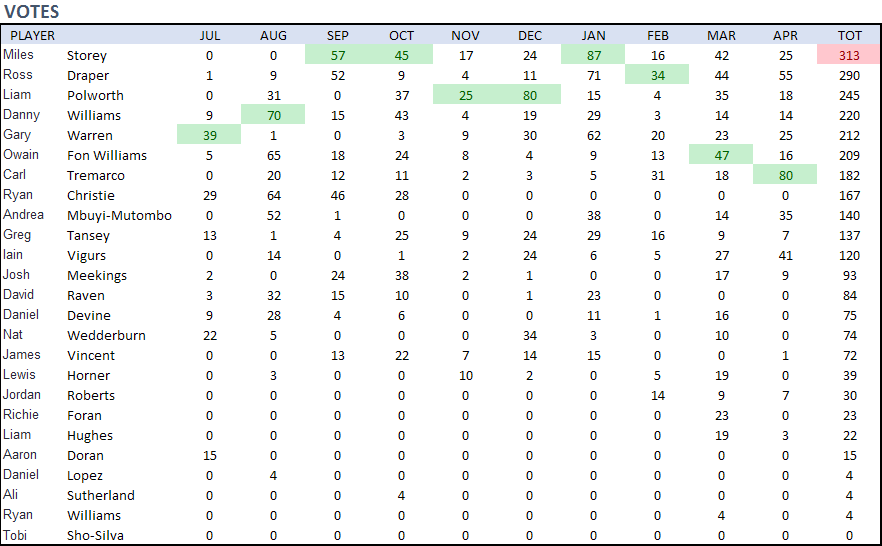