By Robert,
January 28 in Caley Thistle 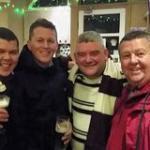 Hearts Fan here be gentle.    I know a load of hearts fans that are taking up this offer and it has not been forgotten how Inverness both helped us out whilst in administration and last season

Jambo here, We all just want to repay the kindness you have shown to us over the years, not many sides have your integrity and it is very much appreciated from the whole Jambo family! Just p

Hearts fan in peace.  I'm personally awaiting 5 signed letters from Robbo.  My monthly pension comes through next week, so I may very well up that to 10 letters.  I'm more than happy to throw a bit of