I’ll be the first to say it, we weren’t actually that bad. We lost Toshney after 3 minutes. Against a decent, well-organised side like Alloa you don’t want to concede the first goal or there’s likely 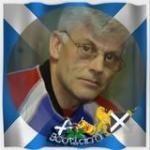 Dundee Utd drop 14 points in last 7 games, if we had won against the bottom 3 when we met them would have been nearer the lead.. all teams around us dropped points today and that's disappointing that

Absolutely spot on, letting both your first choice centre halves leave half way through the season is totally bizarre.  Wonder what JR pearls of wisdom will be this time. Usually  comes out with